„It is with great regret that DEVILDRIVER have sadly been forced to have to cancel their European tour in September / October 2019. This is due to unexpected circumstances, completely out of the control of the band, which means that the band is left with no choice but to cancel all of these shows.

The band would like to stress that they hate cancelling anything and in 20 years of touring the world, they have never cancelled a tour before and are certainly not a band that want to mess their fans or their promoters around. The band and the management would like to apologise to all their fans that had already bought tickets for the tour. Those tickets can be refunded at their original point of purchase. DEVILDRIVER promise that they will make this up to fans and promoters alike when they return to Europe in 2020 with a show bigger and better than ever before.

Thank you for your understanding in this situation and once again, apologies for the inconvenience caused." 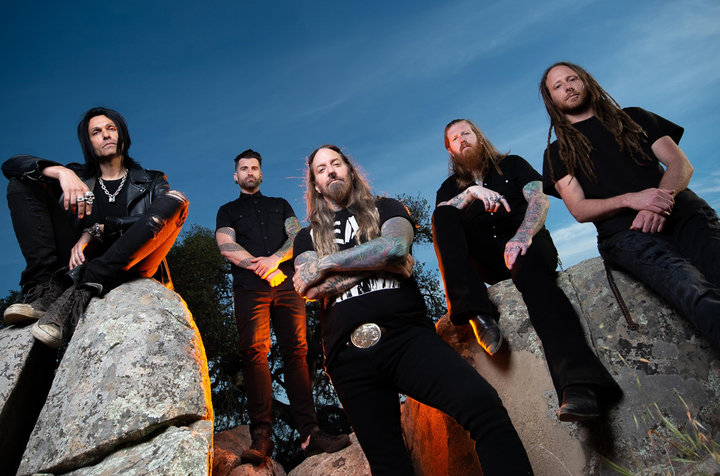 Going against the grain comes naturally for Devil Driver. The globally-renowned California Groove Machine have been a constant and effective force in the heavy metal world for the best part of two decades now. Thanks to widely lauded albums like 2005’s epoch-shredding The Fury Of Our Maker’s Hand, 2011’s ante-raising, ultra-brutal Beast and 2016’s acclaimed career peak Trust No One, the band led by vocalist Dez Fafara (ex-Coal Chamber) are firmly established as one of the most consistent and best loved bands in modern metal. Their almost psychotic dedication to the road is legendary, their mastery of the circle pit beyond dispute: but in 2018, expectations are about to be torched on the mother of all campfires. A monstrous collection of savage and slamming metal interpretations of Dez and his comrades’ favourite outlaw country songs, Outlaws ‘Til The End is both a startling curveball /and/ a ferocious statement of individuality from a band with cojones to spare.

“I think real music has always gotten to me, whether it’s the blues, outlaw country or even real Goth music like Bauhaus and Sisters Of Mercy,” Dez explains. “That stuff has always attracted me, and this is absolutely the real stuff. The blues and outlaw country are what made rock’n’roll. They were around before rock’n’roll… and in my head, I’ve always heard these songs heavy. Lyrically, these are some of the most poignant songs on the planet. So they fit the heavy genre very well… as you can hear! (laughs)”

From the opening seconds of Devildriver’s face-flaying version of Hank III’s Country Heroes (featuring the man himself on guest vocals) onwards, Outlaws ‘Til The End is simply one of the most vicious records the band have made yet. More importantly, these evocative, irresistible songs have all been wholly rebuilt from the ground up, powered by the classic Devil Driver sound and embellished with Dez’s unmistakable feral roar.

“I knew right away that I wanted to have guests on this record, and the first guest I wanted was John Cash Jnr.,” Dez recalls. “I didn’t want this thing to /exist/ without John, without Hank III or without Randy [Blythe, Lamb Of God]. Basically, there were a certain amount of guests that I definitely wanted on it, but as I kept asking people, everyone kept saying yes! Randy and Mark [Morton, Lamb Of God] are both from the country and they were /immediately/ on board. With John, we wound up talking for two hours when we first met, all about his love of heavy metal and my love of outlaw country and my love of his dad’s music. All he wanted to do was talk about metal and all I wanted to do was talk about outlaw country. It was the craziest thing.”

“Lee has a country band called Range War and when he first started in music, his mother gave him her mandolin to play, so he played country music before he ever did punk rock,” Dez notes. “You know what? I’ve been fortunate enough in my career to do songs with Ozzy and some of the greats, but doing a song with Lee Ving? What can I say… he’s my ultimate hero in life. I had a Fear shirt on the first time I ran away from home, you know?”

Still charging forward, proudly against the grain and on the form of their lives, Devil Driver have never made a record like Outlaws ‘Til The End before. But then nor has anyone else. The perfect marriage of badass country grit and neck-wrecking groove metal supremacy, it’s a pistol-packing game-changer delivered by true heavy metal outlaws.

“We knew it was going to be at least three years before the next Devil Driver record, so I wanted to give people something to digest while we keep writing,” Dez concludes. “But don’t you think the scene needs a kick in the ass, man? Everybody’s kinda doing the same shit now. If you can scream, you’re in a fucking band. So we needed to shake things up a bit. This is outlaw country, Devil Driver-style. And it’s fuckin’ brutal.”