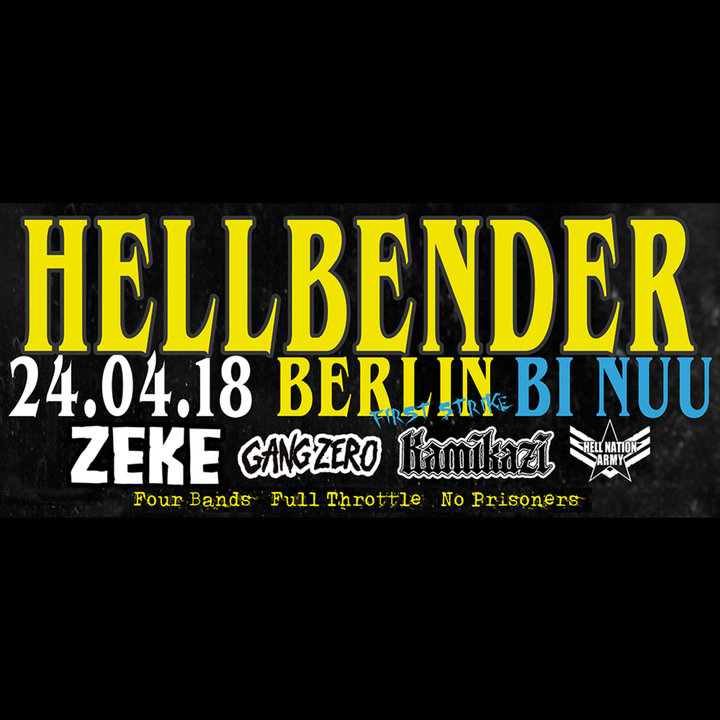 “Ride With Zeke” has quickly become the mantra for music fans who have accepted the invitation brought on by Heckler Magazine when they said, “Welcome the new monsters of rock.” It’s no doubt true that West Coast punk / thrashers ZEKE are monsters. Ever since their very first gig at the Rock City in Seattle in 1993, people have had no choice but to pay attention. Their records will assault you, and their live show will batter you. ZEKE established a nasty disposition while cutting teeth on their own brash hardcore punk. Thank the gods of rock and roll, you’ve just met your new favorite band.

Zeke reformed with a new lineup in 2016 and tore "the old country" a new one last year with their first European tour since 10 years. This year, they're back again and break 14 years of recording silence with their brand new record HELLBENDER, out March 30th 2018 on Relapse Records.

Like a pack of savage hounds frothing at their mouths. Gang Zero blasted onto the Berlin scene last year with a 3 songs on a Split 7" with Berlin Blackouts. Their highspeed, snarling, remorseless brand of Noisy Hardcore Punk has been leaving crowds gasping for more. Debut LP to be released soon.

KAMIKAZI came into existence on September of 2012 under a gloomy night of Salonique in order to create bastard sound. Based on the old beliefs of hating the world but loving filthy rock n roll, they released two E.Ps on tape format in 2014 ‘BASTARD SOUNDS’ and in 2017 ‘AT THE AGE OF DESTRUCTION’. After five years of kamikaziing Greece in squats, streets, bars, clubs and festivals, and sharing the stage with bands like DISCHARGE, DOOM, THE OPPRESSED, DISCIPLINE and all the great Greek underground bands, the four bastards decided to relocate the band to Berlin where fifth comrade joined behind the drums.The band is ready to set fire on the rock n roll barricades..ALWAYS AT WAR!...

HELL NATION ARMY combine Rock’n’Roll and Punk with a tough-minded attitude. The Berlin based band was formed in 2012, when five musicians from various bands teamed up to play loud, fast, dirty and kick-ass tunes. Since then HELL NATION ARMY play powerful live shows with an extreme live appearance. The band’s first EP "Mean Machine" was released in March2014. They're working hard on their third EP, due out this spring.