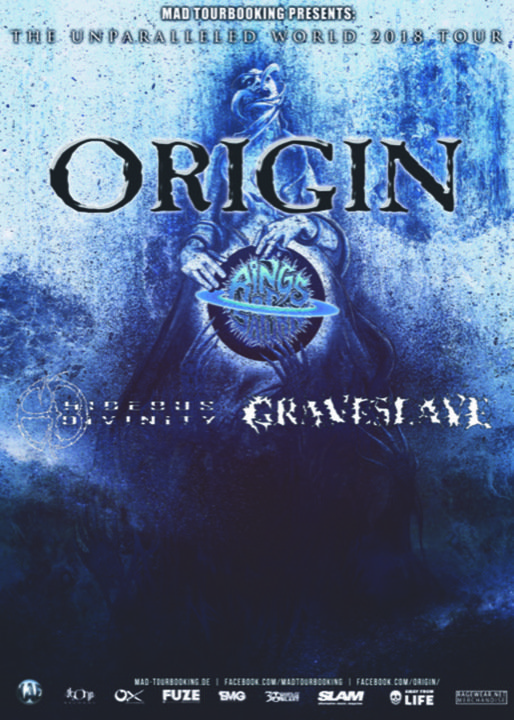 For 20 years, Origin has engaged a full-blown sensory assault of tight, taut, and technical death metal amplified by flashes of grindcore and groove. However, 2017's Unparalleled Universe [Nuclear Blast, North America / Agonia Records, Rest of World] sees the quartet-Paul Ryan [guitar, vocals], John Longstreth [drums], Mike Flores [bass, vocals], and Jason Keyser [vocals]-strengthens that blueprint with a handful of surprises…"It feels like an Origin album, but it's unparalleled to what you might expect if you haven't heard us for 10 or 15 years," says Ryan. "To me, it's a true reflection of ourselves. I compare it to an action movie. Our earlier material is filled with action from beginning to end. Now, the idea is to add a little more depth and dynamics. You could say there are some twists in the plot musically."
The band began compiling ideas for what would become Unparalleled Universe while touring in support of their 2014 sixth offering, Omnipresent. Along the way, the record snatched their highest position on the Billboard Heatseekers Chart, bowing in the Top 10. Meanwhile, it garnered acclaim from No Clean Singing and Metalsucks, building on a string of accolades that includes Ryan landing on Decibel's "Top 20 Death Metal Guitarists of All-Time" list during 2008's Antithesis, as well as that album's finite amassing 1.6 million YouTube views, and successful tours with everyone from Hate Eternal and Cryptopsy to Decapitated and Candiria over the years. They've also shined on the Summer Slaughter Tour in 2009 & 2014. On the road with Belphegor last year, the members debuted a skeleton of the first single "Accident and Error" in front of packed crowds.
"We would ask the audience to give us title ideas, but we could never discern what they were actually saying" laughs Ryan. "Riffs typically start on tour, and I keep them in my back pocket. That's the way it is."

During January 2017, Ryan headed to Chapman Studios in Kansas City, KS to record alongside longtime collaborator and engineer Rob Rebeck [Tech N9ne]. In under a month, they emerged with the ten songs comprising Unparalleled Universe and an expanded sonic palette. "Invariance Under Transformation" tempers a trudging, doom-y groove with a dark hiss and brutal stomp and the dynamic "Cascading Failures and Diminishing Returns" bludgeons and burns, while "Accident And Error" barrels ahead on a double bass air raid with smart bomb precise sweeping arpeggios.
"There are different parts," he goes on. "The slower moments feature a couple of classic circle pit speed metal riffs like on 'Accident and Error.' Then, 'Invariance Under Transformation' is the slowest tempo we've ever done. It's new territory. As musicians, we all appreciate various things, and we're trying to bring out unpredictable moods. We wanted to stir the pot a little."
The opener "Infinitesimal To The Infinite" gallops forward on a steamrolling rush of riffage as Keyser's screams take hold. "It retains the original Origin feel," adds Ryan. "We try to come out of the gate like that."
Rounding out Unparalleled Universe, the group heads south of the border via a murderous and malevolent cover of Brujeria's "Revolución."
"One of Brujeria's albums always gets played on just about every tour we're on," he goes on. "The song meant something at the time right now-especially with everything going on politically. We put a lot of effort in to get the pronunciation right. It came out well for a bunch of gringos!"