We are very sorry to announce that we will not be able to make it to Europe for this summer. Due to some health issues Efrem is having we will have to postpone the dates. Not to worry, it is nothing life threatening, but it is something he has to attend to. We are still able to play live but cannot tour for such a long period of time at this moment. Efrem is living with a constant amount of discomfort and has a series of appointments that will be filled with testing and treatment. We won't be able to fly back and fourth from Europe the amount of times we would need to to make this happen. We will have to postpone the dates and will announce the new dates soon. We are trying our best to make up all the dates before the end of the year. We will be back! Thank you to everyone at MAD, all of the promoters, venues, and festivals that have always been so supportive! Most importantly, thank you to all the fans! You are, and always have been family to us! Please understand, Efrem just needs to handle this right now and we will be back out partying with you all 100%! Death By Stereo can't be stopped! This scene can't be stopped! We are all NEVERENDING! DEATH FOR LIFE! 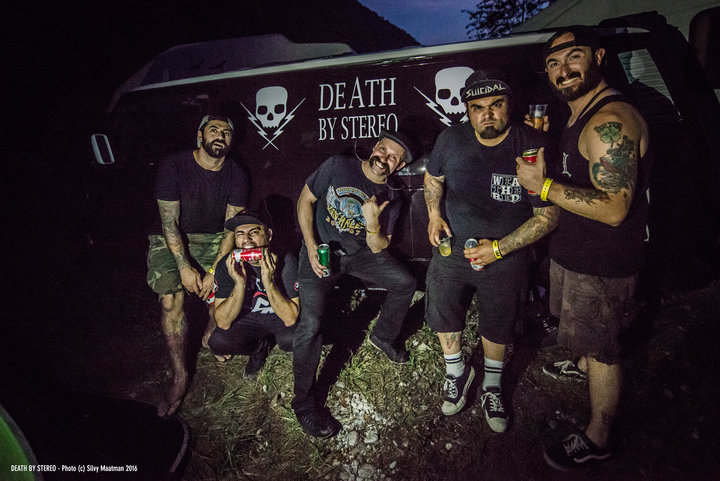 14 Years strong and still nothing can stop DEATH BY STEREO. Coming back harder, faster, and louder than they ever have, their sixth full-length studio album "Black Sheep Of The American Dream" will be out on April 20th 2012. "Black Sheep Of The American Dream" offers up DEATH BY STEREO’s return to their hardcore punk roots, interlaced with crushing metal breakdowns and blazing solos courtesy of the legendary party shredder, Dan Palmer.

Lead Singer Efrem Schulz comes correct with the vocal style that has personified the group’s unique sound. Reaching back to their first album "If Looks Could Kill, I’d Watch You Die…" for influence and taking it into a head on collision with some of the heaviest vocals of the band’s history, DEATH BY STEREO remains focused on the political, conscious, personal, and confrontational. With this album Schulz is calling for the world to stand up and fight.

Arguably one of the best guitarists to ever play hardcore punk, Dan Palmer is known for writing vicious riffs and laying down some of the most technical, melodic, soulful, ripping solos of any players out there. He really drove it home on this one, showcasing all of his skill, aggression, and finesse on "Black Sheep Of The American Dream".

With this album, DEATH BY STEREO brought back original bassist and founding member, Paul Miner. In addition to lending his bass skills, Paul co-produced, co-wrote, engineered, mixed and mastered the album with the idea of taking the bands sound into a direction somewhere between "If Looks Could Kill" and "Into the Valley of Death". With several years of experience producing under Paul’s belt working with some of the most recognized punk, hardcore and metal bands out there; such as TERROR, H2O, THRICE, ATREYU, this record sounds like a brick to the face.

Crushing anything in his path, drummer Mike Cambra annihilates his drums to no end. Balancing precision and chaos is what Mike does best, delivering the fast, hard, heavy, and in your face drumming that has become
part of the trademark DEATH BY STEREO sound.

Balancing chaos and consciousness is no easy task, and few bands will ever do it as well as DEATH BY STEREO. And somehow or another, the band does all this while completely out of their minds on Jagermeister. DEATH BY STEREO brings a conscious message with a no holds barred, uncompromising way of life that has become infamous.

In March 2012, Concrete Jungle Records will be releasing a 7” single (limited to 500 copies / clear vinyl) featuring two new tracks from the forthcoming album "Black Sheep Of The American Dream". The blistering “WTF Is Going On Around Here?” attacks the right wing and calls for people of all nations, colors, and cultures to smash the system of control that holds us down, an idea that is reminiscent of SUICIDAL TENDENCIES at their angriest. The eye-opening lyrics of “The 5th of July” provides a stinging commentary on the July 5th murder of an innocent Fullerton, Ca man, Kelly Thomas, by police. Schulz says “the song takes issue with police brutality and the way the American justice system is designed for us to fail and for the powers that be to take control. No matter what the cost, even human life.” Akin to friends like SICK OF IT ALL and BIOHAZARD this song is will make you want to pummel the
world.

Additionally, this February DEATH BY STEREO will be joining long time friends AGNOSTIC FRONT on their European 30th anniversary tour. The new album, "Black Sheep Of The American Dream" takes the band on an angry party across the state of the world. Hearing them take influence from friends and touring partners like SICK OF IT ALL, SUICIDAL TENDENCIES, PENNYWISE, BAD RELIGION, AGNOSTIC FRONT, STRUNG OUT and MADBALL, but partying like VAN HALEN the whole time. If there is one thing you can take from this record it’s to stand up and be counted, and have a fucking blast doing it. DEATH FOR LIFE.

Death By Stereo are: