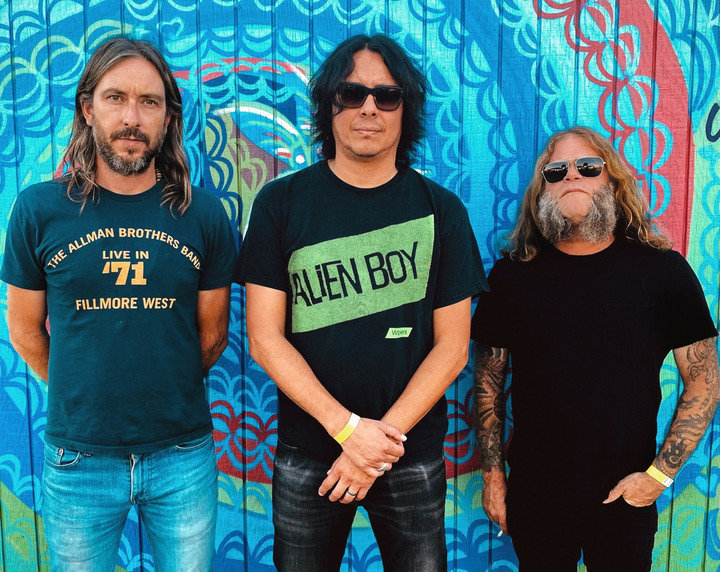 Earthless has a surprise for you. Whereas the band’s three previous albums featured anywhere from two to four completely instrumental space rock jams, the California trio’s fourth and latest, Black Heaven, is nothing like that. “It’s quite different,” drummer Mario Rubalcaba says with a laugh. “It has six songs, and most importantly it has vocals on about 70 percent of the record. There goes being pigeonholed as an instrumental band, I guess...”

Though dedicated fans doubtlessly heard Earthless guitarist Isaiah Mitchell lend his soulful pipes to the band’s righteous cover of the Groundhogs’ “Cherry Red” on 2007’s Rhythms from a Cosmic Sky, they haven’t heard him—or Earthless—quite like this. Of Black Heaven’s six tracks, only two are instrumental. And one of those instrumentals is less than two minutes long. “It wasn’t a premeditated thing to do a record with vocals,” Rubalcaba explains. “On the older records, Mike was responsible for a lot of the riffs that would start these jams, but on this one Isaiah really brought his own pizazz and flavor to it. I’d say that’s one of the major differences on this album: It has more of Isaiah’s input. He took a risk bringing these ideas to us, not knowing if we’d like them. But as with everything we’ve done in the past, it felt very organic and natural.”

When Rubalcaba, Mitchell and bassist Mike Eginton started Earthless in 2001 as a psychedelic instrumental band, they were constantly asked, Are you guys looking for a singer? “That was the joke for years,” Rubalcaba laughs. “But we’ve always known Isaiah could sing. He’s got a great voice. We’d do a cover here and there or maybe write a song for a special project or collaboration, but we’ve never tried to focus on writing a few songs with vocals on them. It was really refreshing to try this approach on a record.”

While the band’s lysergic leanings are fully intact, Black Heaven takes on a more classic rock hue than previous outings. “For me personally, the psychedelic thing is pretty important,” Rubalcaba offers. “But I’m not sure if we’ll always be on the crazier side of things musically. Even on this record, there are moments when it’s more psyched-out, but we’ve always been really big fans of classic rock stuff like ZZ Top, James Gang, Allman Brothers—and of course, Cream. There would be no

Earthless if it wasn’t for Cream. They’re like the great-grandfathers of power trios. So some of those simpler influences have leaked through on this record. To me, [album opener] ‘Gifted By The Wind’ has a more James Gang or ZZ Top vibe than Flower Travellin’ Band or any of the krautrock stuff. With all the vocals and harmonies, that’s definitely a different direction for us.”

In the years since Earthless wrote their last album, 2013’s epic double LP From The Ages, Mitchell moved from the band’s San Diego base up to Northern California. As such, the writing process for Black Heaven changed considerably. “From The Ages was from the era of the band where we rehearsed together a couple times a week,” Rubalcaba explains. “We didn’t really have that luxury this time, so the record was made over the course of a few months with Isaiah coming down for maybe three days at a time, getting in a room and working on ideas.”

Rubalcaba spent much of the downtime between From The Ages and Black Heaven playing drums in the punk supergroup OFF! alongside former Black Flag/Circle Jerks vocalist Keith Morris, Red Kross bassist Steven McDonald and ex-Burning Brides guitarist Dimitri Coats. When Earthless reconvened, the trio faced a bit of a conundrum. “Getting back in a room to write a record with Earthless, I think all of us were a little bit scared, like, ‘How are we gonna do something different from the last record?’” Rubalcaba offers. “There was this unknown—how we could top the last one? But when we finished this record, we were stoked. We’d done it. We created something totally different that we’re all happy with.”

After working out the new material, Earthless rolled out to the famed Rancho de la Luna Studios in Joshua Tree, California, where illustrious desert rock denizens such as Queens Of The Stone Age, Kyuss and Masters Of Reality cut some of their weirdest and wildest work. Owned and operated by Eagles Of Death Metal guitarist Dave Catching, the studio is the stuff of legend. “I had struck up a friendship with Dave a few years ago, just from Eagles Of Death Metal and OFF! playing together at some festivals in Europe,” Rubalcaba explains. “We’ve been talking about having Earthless record at Rancho for a while now. I wanted to work with him because he’s not the kind of guy that would interfere with the writing process too much, but he has good ideas for sounds and subtle input that really helped shape things.

It’s safe to say that Earthless got some sand in their shoes—and their tunes—thanks to Rancho’s unconventional setup. “That desert vibe really sunk into this record even more than I thought it would,” Rubalcaba concedes. “I don’t think it sounds like a ‘desert rock’ record per se, but Rancho really brought that feel into what we were playing a little bit more. It’s really cool out there because it’s not really a proper studio. It’s a house, basically. Dave’s bedroom is where you do the guitars. The mixing room is the living room. It was a really cool experience hanging out and recording there.”

As for the album title itself? “Whenever we couldn’t jam with Isaiah, Mike and I would play just bass and drums together, and we’d call that ‘Black Heaven,’” Rubalcaba explains. “That was basically code for just me and him jamming, and we always joked that one day we’d have a side project with that name. The longer instrumental track on the new album has a heavier, darker feel, so I just thought of ‘Black Heaven.’ Then I thought it would sound good as a record title, too—so there isn’t really too much of a deep meaning behind it, unfortunately!”

Deep meaning or no, Black Heaven is a game changer for Earthless. Nobody is more aware of this than the band members themselves. But they also know this: you’ll never get anywhere if you’re running in place. “I’m sure there will be some people who have come to expect the big gargantuan space rock jams, and I don’t know if they’ll be into this or not,” Rubalcaba admits. “But I’m ready to deal with a little bit of disappointment from people who just want the freakout stuff. At the same time, I think people are gonna enjoy hearing a different side of us. If people really listen to what we’re doing, it’s gonna sound like us. Sometimes it just takes a few listens. And that’s the kind of stuff that pays off more in the end.”