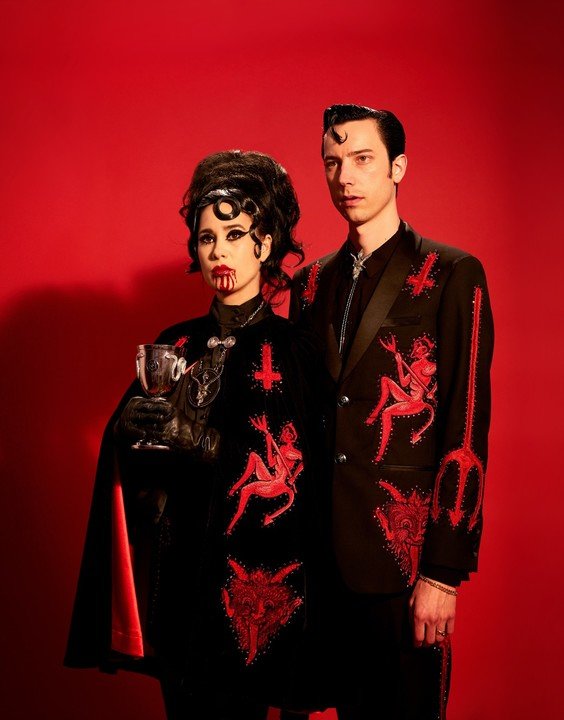 Alexandra and Zachary James are the high priests of Twin Temple, the Satanic doo-wop band hailing from the city of Angels.

The band was started on Halloween (a witch’s sabbath) in 2016 when a destruction ritual was performed, and Alexandra and Zachary stepped into their power as Twin Temple, energetically killing all their previous incarnations up until that point.

Although you may expect heavy guitar riffs and a thumping bass to accompany cries of “Hail Satan,” instead you’ll hear old-school, classic riffs and Alexandra’s crooning voice that sounds straight out of the ‘60s. While many confine Satan to the likes of black metal, the duo is breaking the notion that Satan has a type. After all, who says Satan wouldn’t get down to some classic Americana? Inspired by the golden era of rock ‘n’ roll, Twin Temple rejects conformity of any kind, whether it’s through their magick, performance, or sound.

And while a lot of “Satanic” metal bands begin and end their worship of Satan on stage, the same can’t be said for Twin Temple. Both their music and their practice of Satanism, on and off the stage, are rooted in the ideals of free will and giving space to those who are often not allowed any.

So no, Twin Temple doesn’t drink the blood of virgins or kill babies to sacrifice on the full moon. They are challenging notions about what it means to free the oppressed, fight back against dated and binary ways of thinking, and doing it all while hailing the dark lord himself.

If there’s anything to expect with Twin Temple, it’s the unexpected.