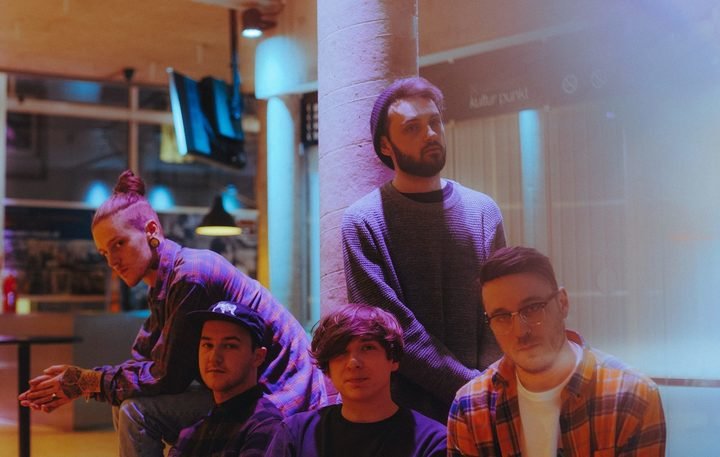 Casey’s 2016 debut, Love Is Not Enough, was a raw and visceral exploration of vocalist Tom Weaver’s personal relationships. It was an open-heart surgery that examined his romantic and familial bonds, or their wreckage, in the context of his own mental health, to devastating effect. Its follow-up, Where I Go When I Am Sleeping, is no less revealing. But instead of concentrating on what Weaver considers the same old topics of love and loss, the band – completed by Liam Torrance (lead guitar), Toby Evans (guitar/backing vocals), Adam Smith (bass) and Max Nicolai (drums) – instead turns its focus to the issues of Weaver’s own body and the three main physical and mental afflictions that have dogged him for the majority of his life.

“I was diagnosed with brittle bones at birth,” he explains, “and when I was 15 I was diagnosed with ulcerative colitis and at 20 I was diagnosed with manic depression. I’ve also had a heart attack and a stroke and I was in this crazy car accident that crushed half my face. They’re big life events, but a lot of the stuff that’s happened to me medically was stuff that I was just living through at the time. Looking back now, though, I realise I could have died four or five times. I’m lucky to be here.”

That, then, is the central theme of the record, its 10 songs and two interludes bound by the troubling conditions that still plague Weaver to this day. But while When I Am Sleeping is a continuation and extension of that first record, the events it describes run concurrently to those that take place on the first album.

“In the same way as the last one, this album covers a pretty broad time,” says Weaver, “from when I was about 15 until about the start of this year. But it’s not in chronological order. Each song doesn’t refer to a particular point in time – it just refers to things I’ve generally felt over that period.”

To that extent, When I Am Sleeping is a counterpart to its predecessor, a jumble of snapshots and reactions and experiences and feelings that give us a glimpse inside Weaver’s head and his life, but which don’t necessarily tell a linear story. Nor are they hyper-personal so as to alienate the listener. Rather, Weaver was careful to make sure his accounts of his experiences, while referencing very specific things, were also relatable from an outside perspective. Opener ‘Making Weight’, for example, tells a story about the time Weaver’s mother found him passed out in the bathroom because he’d lost so much blood from his (at that time undiagnosed) colitis, but it doesn’t have to be about that.

“What the last record taught me,” he says, “and what I really brought over to the new one is that I shouldn’t be dissuaded from talking about personal experiences and relating to individual moments or periods I remember quite vividly. But I was more confident in being able to pick those out and expand on them, but also dilute them to the point where I can still recognise what I’m talking about and other people can maybe apply them to their own situation.”

There’s more confidence, too, in the music. Produced by Brad Wood (Placebo, Far, The Smashing Pumpkins, mewithoutYou, Touché Amoré), these songs are much more expansive, atmospheric and layered than anything the band have done before. It’s an album that flows – much like the neural network depicted on the cover by Martyna Wisniewska, the band’s friend and photographer who has been a part of this album’s journey from conception to completion – from one vividly depicted moment to the next, one memory to another. And while there is still some desperate rage and gutteral screaming in the likes of ‘Wavering’, ‘Phosphenes’ and ‘Fluorescents’, much has been replaced by calmer, though no less anxious, soundscapes. It makes for an incredibly cohesive and immersive record, yet, interestingly, its songs weren’t so much written as the full band this time around.

“I don’t actually know if there’s a single song on the record where everybody in the band had input,” chuckles Weaver. “We were like, ‘What if we’ve all written completely different stuff and what we have doesn’t sit well together? What if it just sounds really weird and mismatched?’ It wasn’t until we had our first pre-production day that we sat down and played through everything together and we realised that it all works.”

In particular, ‘Phosphenes’ and ‘Fluorescents’, which were written at the same time and are connected by an instrumental interlude from ‘Fluorescents’ played in reverse, lie at the metaphorical middle of the album, both lyrically and musically. Riddled with (literal) pain and anxiety, both songs paint a picture of the fragility of existence as told through Weaver’s own personal experience. Truly transcendental and raw, they form the heart of the record, one that won’t stop beating despite the many attempts at shutting it down that it’s endured.

“My main three illnesses don’t play very nicely together,” Weaver admits. “When I get a flare-up of colitis I have to take this steroid Prednisolone, but the side effect of Prednisolone is that it reduces bone density. I’ve already got brittle bone disease, so it facilitates early onset of osteoporosis and arthritis. At the same time, if I’m depressed I tend to become quite lugubrious and stop taking care of myself, which is when I generally forget to take my medication and then I get ill and then I worry about getting ill and have to take this medication which means I’ve got to have this bone filling steroid. It all kind of loops in. One thing I’ve kind of learned is the best way to not stress about it all is to be open and honest.”

That’s exactly what he is on this album. The music and the themes and the lyrics and the presentation all coalesce to present a document of despair and suffering, but also of defiance and strength, of pushing though and overcoming the most crippling adversity. This is an album that proves the human spirit (and body) can endure a whole lot of agony and torment and still flourish, still be triumphant.

“I don’t like the phrase,” Weaver says, “but I think the sentiment holds true that what doesn’t kill you makes you stronger. Well, I wouldn’t necessarily say stronger, but what hasn’t killed me has definitely made me who I am and I wouldn’t be as open a person as I am, I wouldn’t be as well-versed in my own head if I hadn’t gone through everything.”

As Weaver proclaims on the heart-wrenching spoken word story at the end of album closer ‘Wounds’: ‘In all the ways that I am weak, I am also strong / Learning how to speak gave me the strength to carry on.’