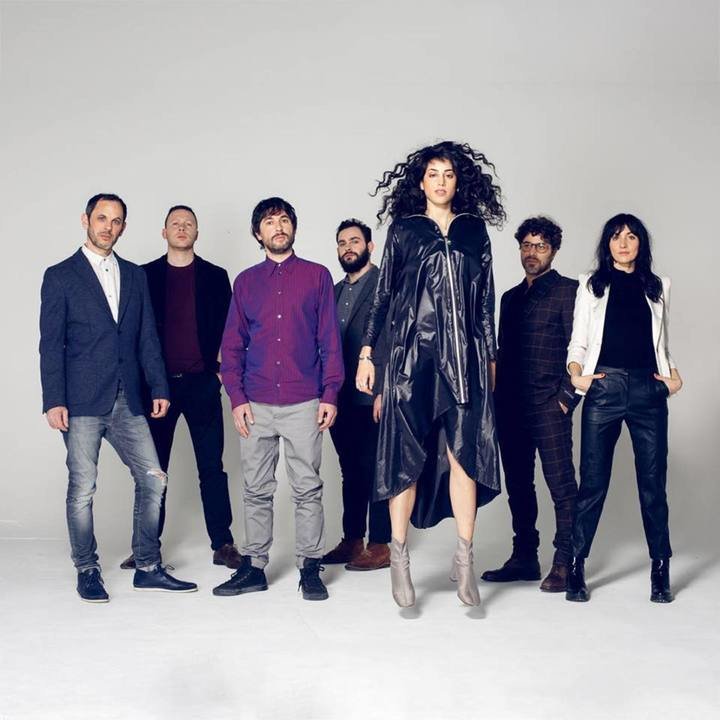 It's over 10 years since Oi Va Voi first embarked on their musical and cultural voyage of discovery. Six young Londoners with varied influences joined together with a common aim: To reinvigorate the sounds of their Eastern European and Jewish roots.

Their debut album "Laughter Through Tears" fused modern dance music, singer-songwriter sensitivity and their Jewish cultural heritage with global rhythms drawn from Eastern Europe, the Mediterranean and beyond. Adding KT Tunstall into the mix on vocals, the band were well on their way.

"Laughter Through Tears" received rave reviews and won two awards at the BBC Radio 2 World Music awards. Yet anybody who saw Oi Va Voi’s spectacular live shows was left in little doubt that they were far more than a world music act with an enviable ability to rock a crowd and get a dance floor heaving. The album went on to sell more than 100,000 copies worldwide.

The follow up album, “Oi Va Voi” was greeted with great press acclaim in Europe, and beyond but within a month of its release the group’s label, V2, was sold to Universal and closed down. Undaunted, the band regrouped in the spring of 2008. They knew that the only way for them to have real, long lasting success on their own terms was to take control of every aspect of their career. The band played a string of festivals across Europe, pouring all profits into the recording of their third studio album.

Released in the spring/summer of 2009 "Travelling The Face Of The Globe" was an incredible return to form by the band. This was the album that die hard Voi fans had been waiting for since the debut album "Laughter Through Tears". But as well as re-capturing the imagination of existing Voi fans "Travelling The Face Of The Globe" reached a whole new audience across the world. Reunited again with Grammy award winning producers Bacon & Quarmby, and featuring the beautiful vocals of Bridgette Amofah, the band crafted an album that was in turns playful, emotive, boisterous and deeply moving.

Since the release of "Travelling The Face Of The Globe" the band have been on an intensive touring schedule that has seen them playing at some of the most prestigious music events and venues in the world. Weaving their way through Europe, Russia, Turkey and Israel onto headlining slots Sziget festival (budapest) 2 years in a row and a highly acclaimed performance at Womad. The performances at London’s Shepherd’s Bush Empire and Koko reminded their home crowd just what the band had been up to on the road.

In 2017 the band went back into the studio and recorded their 5th studio album. The new album will be released in November 2018 on V2 Records.