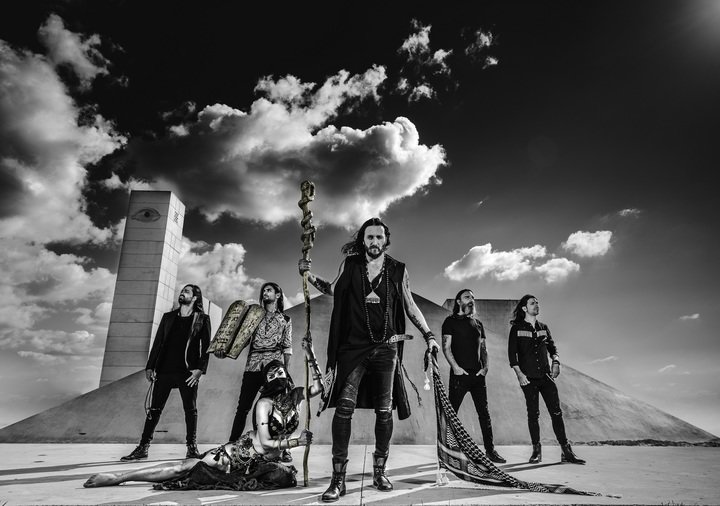 One of the most revolutionary bands in the history of heavy music, Orphaned Land are an unstoppable force. Formed in Israel in 1991, these self-proclaimed ‘Oriental metal’ artisans have spent the last 26 years working tirelessly to use their creative endeavours as a means to spread a positive and peaceful message. Over the course of five conceptually deep and musically ingenious albums, the band have been true to their word, uniting fans across the Middle East and beyond, regardless of nation, face or faith.

Hugely respected in the world of heavy music – the band won UK magazine Metal Hammer’s ‘Global Metal’ award in 2014 – Orphaned Land have also been recognised for their tireless contribution to bringing people together, accruing three major international peace awards along the way. Meanwhile, fans have long been campaigning to see Orphaned Land awarded the Nobel Peace Prize, with many thousands already signing an online petition. With fans spread across the globe, not least a diehard fan-base across the Arab world, the band’s quest for truth, love and hope has clearly made a remarkable impact, to the extent that modern-prog-legend Steven Wilson has proclaimed them to be one of the greatest metal bands on the planet.“I would say that the Orphaned Land members are the most famous Israelis in the Arab world,” states frontman and founder member Kobi Farhi. “Those achievements, the peace awards we’ve received and the fact that we’re doing a better job than our own foreign ministry, maybe it all means that we are the true ambassadors for our country. We are the ones creating a dialogue and friendship through music.It seems safe to say that Orphaned Land are far from the average metal band. In 2018 they will once again prove the uplifting and unifying power of their extraordinary music. Several years in the making, Unsung Prophets & Dead Messiahs marks another high watermark for Kobi and his band mates. Inspired by the writings of Plato and the thwarted aspirations of peaceful revolutionaries throughout history, it’s a wholesale return to the conceptual depths and musical intricacy of earlier records like 2010’s Steven Wilson-produced The Never Ending Way Of ORwarriOR. Veering from epic brutality to ornate theatricality, armed with an astonishing array of inspired melodies and euphoric crescendos, Unsung Prophets & Dead Messiahs is simply the finest and most powerful album the band have produced. Most importantly, it is an album fuelled by righteous anger at the state of humanity in 2017.“We are angry, yes, with governments, the media and all the brainwashing you can think of,” Kobi states. “We are trapped in a system that simply became smarter.

It just /looks/ like freedom. The emperors are still being emperors, and no matter how far humanity has gone with technology or science or anything else, when it comes to how one human being treats another, we are still at the same place. We are being drugged by media and gossip that keeps us far away from those things that are really important.We read and know more about Kim Kardashian's ass than kids that are dying in Africa, just because there is no clean water for them to drink, Einstein once said: The world will not be destroyed by those who do evil, but by those who watch them without doing anything, we are the ones who are afraid of the light, like the cave men of Plato, like the sons of Israel that didn't want to leave their life of slavery in Egypt."With guest appearances from prog-rock-legend Steve Hackett (ex-Genesis) and metal luminaries Hansi Kürsch (Blind Guardian) and Tomas Lindberg (At The Gates/The Lurking Fear), Unsung Prophets & Dead Messiahs is an artistic tour- de-force from a band with a formidable and furious sense of purpose.“When I’m writing music with the band, I’ve always been trying to figure out why humanity is unable to break out from the cycle of wars and bloodshed and ego,” Kobi muses. “It’s not due to a lack of solutions. There are many solutions. The biggest problem is that people don’t want to face those problems. Our education system teach us about trigonometry but not about human behaviours, we learn about a never ending bloody history but not about how to run a dialog, how to listen to each other, If you look at the history of mankind, there is a pattern. Every time a revolutionary figure emerged throughout history, whether it’s Socrates, Jesus Christ, Che Guevara, Martin Luther King, Mahatma Gandhi or many others, they were all assassinated. It’s a pattern that Plato acknowledged 2500 years ago and you can see that we’re still trapped in that. On this album, we say that loud and clear.”As dark political shadows loom over the world and bloody conflict erupts with enervating regularity, Orphaned Land’s music and message have never been more vital than they are today. Unsung Prophets & Dead Messiahs promises to be one of 2018’s most celebrated albums, but this is one band that does not measure their success in record sales. Instead, the lost art of making the world a better place remains their primary concern.“I had a conversation with a fan from Syria. He told me how important we are but I said to him, ‘I don’t know that we’re so important, we haven’t saved the life of one kid in Syria...’ which is true,” Kobi notes. “But then he said ‘Maybe you didn’t save a child’s life, but you gave hope to many people.’ That’s much more than nothing and we shouldn’t disrespect that. I’d be happy if Orphaned Land can just play a role of showing people that there is another way and that we can step out of the darkness and go towards the light.”

The release of “Unsung Prophets & Dead Messiahs” is January 26th 2018.