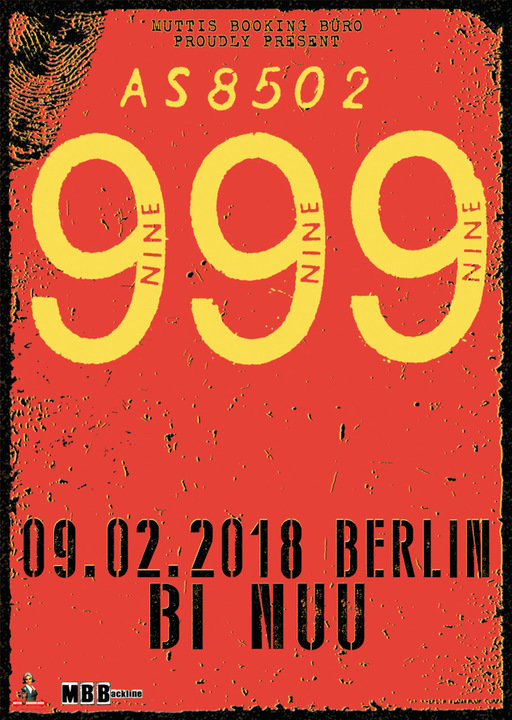 999 suffered a few problems and setbacks during 2010 but will continue into 2011. We extended our Death in Soho tour through 2010 and toured in England, Spain, Poland, Holland, Germany and Scotland after which the show at the 3 Tuns in Gateshead was cancelled due to the snow and severe weather conditions. 999 apologise for not making it but we're sure that everyone understood the situation and we will re-schedule the date if possible.

999 are confirmed to appear at Blackpool Rebellion festival again this year and I will also be doing the acoustic stage solo - with electric guitar. This will be the 16th Holidays in the Sun/Rebellion Festival and 999 are one of the three bands to have done everyone of these.

We would like to say thank you to John and Gareth for helping us get through the atrocious weather conditions in Scotland and getting us to the shows and to Michael for organising things for us in Fraserburgh. Also thanks to Dave who drove us right across Europe and back and a big thanks to Kevin who has helped us so much with our website and other stuff.

Also a very special thanks to everyone who came to the 999 shows this year, keeping us going. We did some amazing, unforgettable, fantastic, brilliant shows thanks to you lot out there! Long live the music!