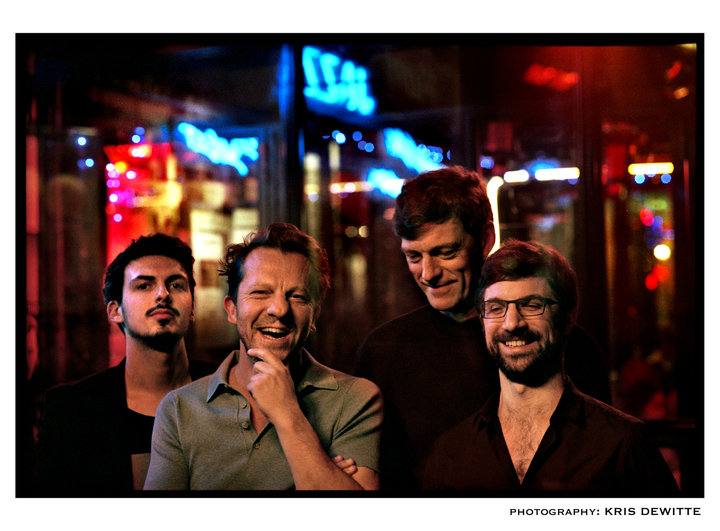 Feel it. The sticky faux leather of the backseat. Smell it. A whiff of alcohol, mixed with the driver’s cologne. You can almost taste it: the fear of being conned, the terror of a high-speed crash, the promise of excitement just around the corner.

Taxi rides are all of that.
Tom Barman loves them. “It’s like indoor travelling,” he says. “It’s cosmopolitan. It’s the rush of not knowing exactly where you’re going. It’s part of the art of living far from home. ” Sounds like a definition of jazz, if ever there was one.

TaxiWars displays high energy and sensitivity, pride and ambition, and a punkiness that sets the band apart from the plush jazz scene, all thanks to Belgian saxophonist Robin Verheyen’s punchy, melodic lines and dEUS frontman Tom Barman’s haunting lyrics. A compelling beat, a stinging saxophone, whispery sandpaper vocals with a dark, sensual touch. TaxiWars is sharp and trashy with a clash of spoken word, parlando, JazzNotJazz, Serge Gainsbourg and Art Blakey.

Vocalist Tom Barman has been fronting the indie-band dEUS since 1994, selling over a million albums along the way. He directed the 2003 film Any Way the Wind Blows, and oversaw two acclaimed jazz compilations: That’s Blue + Painters Talking (Blue Note, 2006) and Living on Impulse (Impulse!, 2012).
Saxophone player Robin Verheyen moved to New York nine years ago and has built a reputation as one of the great young talents in the world of jazz and classical music. He has released two albums with the Robin Verheyen NY Quartet, and has performed with such artists as Marc Copland, Ravi Coltrane, Narcissus, Gary Peacock, and Joey Baron.

‘Barman and Verheyen breathe new life into jazz and poetry with steaming songs. On October 7 the second album of TaxiWars will come out on Universal Jazz International.