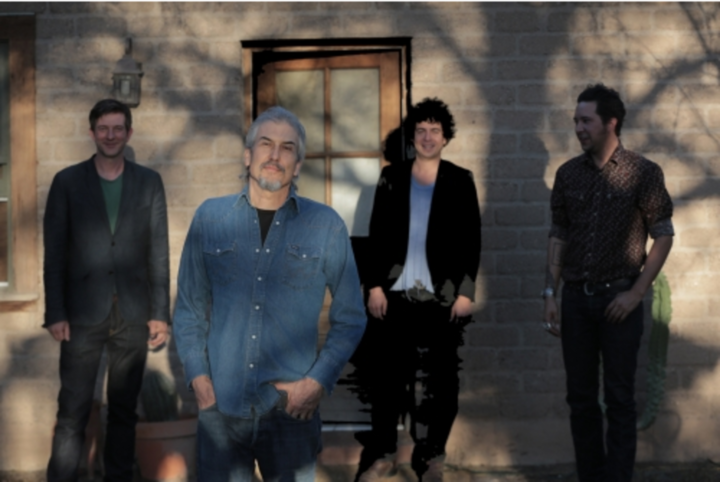 LOS ANGELES, CA, March 13, 2015 – GIANT SAND, the iconic and influential band fronted byluminary Howe Gelb, celebrates 30 years of freewheeling and ever-evolving music making on new album,Heartbreak Pass, due May 5, 2015 on New West Records. The album spans founder Gelb’s far-reaching careerand mixes the rollicking nature of the band’s 1985 debut, Valley of Rain, with the dusty alt-folk, desert-rock andjazzy lounge-piano explorations of his most recent releases. "There are 3 volumes of 15 songs here representing living 2 lives for 30 years. Don’t do the math. It doesn’t figure,” explains Gelb. “The 1st volume is a loud and luckyabandon, as if there’s no choice. The 2nd volume is more heady, steady and direct, what they call Americana these days. The 3rd volume is the heart in constant turmoil from the effect of crossing the pond way too often, the blessed curse of the indie transponder." GIANT SAND will unveil the new songs at SXSW in Austin next week at two special shows – the New

West day party at Threadgills on Thursday and the label’s official showcase at the Continental Club Friday night alongside label mates The Deslondes, Daniel Romano, Buxton, New Madrid and Luther Dickinson. They will then follow with a European tour this spring including appearances at both Primavera Sound in Barcelona and

Optimus Primavera Sound Porto in Portugal, This Is Not A Love Song Festival in Nimes, France and several shows throughout the UK including Union Chapel in London and St. George’s Hall in Liverpool as well as the End of the Road Festival. When not touring with the band, Gelb will reunite with friend Grant-Lee Phillips for another co-headline tour together. A Spanish tour co-headlining with M. Ward is in the works for September. Self-produced by Gelb (producing credits include KT Tunstall and Sylvie Simmons) the album was truly a global undertaking and made all across the world in between his ping-ponging from the desert to Europe, where he does most of his touring these days. “It first sprouted in Brussels,” Gelb reveals. “Some strings attached in Crete... a choir acquired in Canada... a wall of sound in Berlin... then a little noodling in Italy... and a dash in Nashville... a vocal quotient in Croatia... a couple linnets in it in Holland ... Jason’s portal in Portland ... the rest slowly simmered in Tucson... and the whole thing was mixed in one place... bristling in Bristol.” Heartbreak Pass features the current GIANT SAND lineup of Thøger Lund, Gabriel Sullivan, Brian Lopez, Jon Villa, Peter Dombernowsky, Nikolaj Heyman, Anders Pedersen, Iris Jakobsen and Asger Christiansen who trade off on instruments from song to song like a game of musical chairs. Frequent collaborators Maggie Bjorklund plays pedal steel on several tracks while Lonna Beth Kelley offers a smoldering counterpoint to

“Heaventually” opens the album with Gelb’s characteristic clever wordplay and Italian singer Vinicio Capossela’s Waitsian recitation and from there moves to the upbeat indie rock of “Texting Feist” and garagey “Hurtin’ Habit.” “Transponder,” a collaboration produced by Jason Lytle, has all of the signatures of his former

The pedal steel of “Song So Wrong” signals both the start of volume 2 and the rootsier side of the album but as with most Gelb records his creative restlessness kicks in and it’s followed with “Every Now And Then.” What starts with just Gelb and guitar builds to a climax of Mariachi horns, Spanish guitar and the Voices of Praise gospel choir. On “Home Sweat Home,” he wrestles with the push and pull of being a touring musician and constantly having to leave family, delivering the genius lyric: “Get that terminal feeling/And they upgrade me to

seat 2 B/For too many miles flown/ But 2 B or not 2 B, ain’t home.” The final third of the record, made for “late night musings,” is hushed and plaintive and sees Gelb tickling the ivories like some kind of cosmic lounge singer. The album comes to a close with the touching “Forever and Always,” a song written by and featuring Gelb’s 12-

year-old daughter. Called “the scruffy master of alt-country eclecticism” by NPR, Gelb has been making music since 1980 and has a long run of indefinable and influential recordings ranging from punk and roots-rock to psych, jazz, gospel and even traditional Spanish music. Since his early lo-fi envelope-pushing recordings with renowned slide guitarist

Rainer Ptacek as Giant Sandworms, Gelb has remained one of the most inventive and unique American musicians of the last three decades and has created a body of work that The Guardian hailed as “equal parts dazzling, intriguing, beautiful, maddening, musical and perverse.” Guest artists over the last three decades have included Victoria Williams, Neko Case, Juliana Hatfield, PJ Harvey, Vic Chesnutt, Steve Wynn, Vicki Peterson, M. Ward and Isobel Campbell. Giant Sand’s incarnation in the ‘90s included Joey Burns and John Convertino, who went on to form the

acclaimed Latinesque unit Calexico. In addition to bestowing the world his own sun-warped music, whether as Howe Gelb or Giant Sand, or one of his other projects like the Band... of Blacky Ranchette, Arizona Amp & Alternator, ‘Sno Angel or OP8, he also discovered M. Ward and Grandaddy; he released the former’s debut on his

own label and helped get the latter signed to V2.