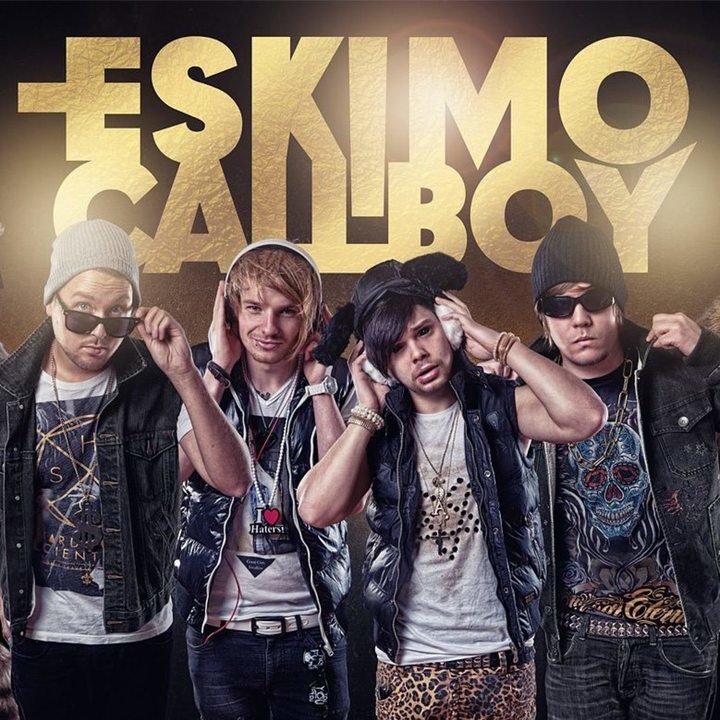 According to the dictionary, polarise is a weak verb which often has a strong
effect, most of the time unintentionally. However, this is not the case for Eskimo
Callboy. "While writing of our album, it was our top priority not to miss out on
the famous "shake of the heads" by the critics", said singer Sebastian aka Sushi
regarding the themes of polarisation and provocation. So, a system lies behind
everything that the six piece does. It is no coincidence that the band's name tries to
approach the poles apart...

For ten years, the six musicians of Eskimo Callboy wandered through this cosmos
called „Rock Music“, until they found each others in 2010. Rumor tell, that spirits
had their part in the game, when the present concept first took shape musically. The
song "Monsieur Moustache vs. Clitcat" represented the initial spark to what Eskimo
Callboy represents today, according to their own statement: “Danceable porn-metal,
with a pinch of psychedelic glam rock!“ This catches on, turns on and scandalizes.
Sometimes.

In past year, the 6-track EP "Eskimo Callboy 2010" reflected the creativity of these
six midtwenty fellows from Castrop-Rauxel in Germany at the beginning of their
existence as a band; however, since then a lot has happened. Too much to remain
unmentioned. Everything had to be recorded on an album. "After we had released
our EP, we went direcly on stage. After six months and 30 shows, so many things
had happened that an album was needed. Even relationships broke up because of
the band, so that everything had to be renewed and, above all, recorded."

Despite of all developments, when writing the new songs Eskimo Callboy oriented
themselves towards the sound on their EP. But as time went by, their compositions
were becoming increasingly sophisticated, so that on the new longplayer just a sort of
bridging remains.
The best example for this development is the first single „Is Anyone Up“, in which the
band self confidently combines brutal metal-riffs with poppy electro-elements and
anthemic refrains. Whether songs like “Bury Me In Vegas“, “Wonderbra Boulevard“
or “The Kerosene Dance“, Eskimo Callboy make clear that they are cutting-edge with
their modern metal-sound.
"The album is harder and at the same time it has become more pop, though it
remains connected to the previous style, so that we can say that we have remained
faithful to ourselves."

Remaining faithful to themselves means also keeping their light-heartedness of
which they owe their multitude of fans. They come close, carelessly, lightly and
courageously. They continue joining what is difficult to join and creating issues
for discussion. "For years, each member has been musically well acquainted with
metal, but privately we listen to a lot of electro and pop music, too. Nothing was
too absurd when we wrote the EP. We have tried many new things and we have
rejected nothing, actually. And although Eskimo Callboy became more professional in
some respects during the first year, it was clear that we didn't want to lose our light-
heartedness."

Signing with Redfield Records belongs to the "professional things". "The label saw
our shows. Then, we talked and they seemed to be assured by what they had
seen and heard." But also the band's organization became more professional, the
structure of today is a team that "feels like a small family". They have become best
friends, while the band is growing more and more, no longer being being a simple
hobby. "We spend so much time together; therefore, the sense of community has
also tremendously grown."

This is why their lyrics are often about true, collectively experienced stories. "Behind
every song lies a true story, which is improved with lots of imagination. However, no
one should take the lyrics too seriously, because they involve a lot of sarcasm. They
are about parties, sex, booze experiences and interpersonal relationships."

The savoir vivre of the carefree youth is especially reflected again in the dance-
parts of their music. Because these six know from personal experiences, what their
generation wants. "Partying and dancing! Through the electronical elements, a
danceable mix can be noticed in our music. That is very important to us, because our
music is meant to create a good mood."

The priorities are set, it´s all about looking ahead now. "We simply want to continue
as before. A lot of travelling, meeting new people, visiting cities, in order to expand
our network - shortly: having a good time. Our "big" goal is to participate in a tour
through the United States. But above all, we do not want to give up that what our
music stands for. Because it's not just about the music alone, but also about a
temporary sense of life, that we want to achieve with it."
Presented by
Share